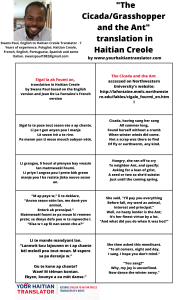 The translation helps reduce language gaps and enables everyone to enjoy this delightful story at no cost.

HERNANDARIAS, ALTO PARANA, PARAGUAY, November 11, 2022 /EINPresswire.com/ — YourHaitianTranslator is pleased to announce it has released the beloved tale, The Ant and the Grasshopper, in Haitian Creole with audio.

In the service’s most recent news, YourHaitianTranslator is pleased to announce it has just published Aesop’s The Ant and the Grasshopper translation in Haitian Creole with audio. The famous fable was released because it is virtually unavailable online in Haitian Creole, and Google Translate is an unreliable source for accurate translation into Haiti’s true national language. The translation includes an audio version read in Swans’ own voice, so that both Haitian students and English speakers can hear the pronunciation.

“People may be wondering why the translation of The Ant and the Grasshopper in Haitian Creole matters,” Swans says. “There are three reasons why this is so important: First, Haitian Creole has long been marginalized by the Haitian society’s elite, where French has been used as the primary language for education and official affairs, and yet 90% of the population doesn’t have access to quality education in French due to the cost of attending the few schools that deliver native-level education in French. This creates a linguistic barrier and underclass: no money, no French education.”

“Second, the compulsory use of French for school textbooks automatically excludes more than 90% of the population from acquiring and sharing universal knowledge because the true native language of all Haitians is Haitian Creole,” he continues. “Third, knowledge is most easily assimilated and acted upon when it is presented in the learner’s native language.”

To make even more beloved tales in Haitian Creole accessible, Swans also has plans to translate more Aesop fables and make them available online to the general public at no cost. By doing so, he hopes to show the importance of dealing directly with a human Haitian Creole translator when an institution needs to translate documents from English to Haitian Creole, or to transcribe audio and video recordings from Haitian Creole into English.

Swans Paul, born and raised in Haiti and college-educated in the States, is the founder/owner of YourHaitianTranslator. He boasts over 7 years working as a freelance Haitian Creole translator for various translation agencies all over the world, in countries such as the United States, Canada, France, the United Kingdom, Germany, Egypt, and more.

Besides English to Haitian Creole translation services, Swans has also worked on French to English transcription projects for companies in the UK, France, and Canada – transcribing audio recordings from French into English. With his team, he can also translate Spanish audios into English, as well Brazilian-Portuguese audios into English, having worked as a private tutor for Brazilian people in Boston and given various interviews on Brazilian radio stations.

Swans is a self-professed digital nomad, currently living between Paraguay and Brazil.

Article originally published on www.einpresswire.com as Haitian Creole Translator Publishes ‘The Ant and the Grasshopper’ in Haitian Creole with Audio