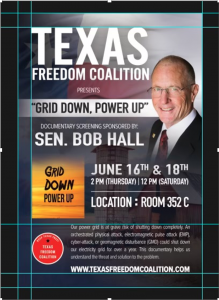 This new film, narrated by Dennis Quaid, explains the dire threats to
America’s power grid and the need for immediate action.”

AUSTIN, TEXAS, USA, June 18, 2022 /EINPresswire.com/ — State Senator Bob Hall is sponsoring two screenings of the powerful documentary Grid Down, Power Up at this year’s Texas State Republican Convention in Houston. The June 16th and 18th screenings mark the 2nd major public showings of this important documentary, which follow up a May 18th presentation at the Capitol to legislators in Austin, and they are part of a crucial effort to build awareness and momentum leading to the official premiere of Grid Down, Power Up at Freedom Fest in Las Vegas, Friday, July 15th.

“I’ve been concerned about this glaring issue with our country’s civilian infrastructure since I first learned about it 10-plus years ago,” says narrator Dennis Quaid as the film opens. “This is a very serious situation, but it’s eminently fixable.”

The film skillfully explains that the threat to America’s power grid comes both from hostile foreign agents and nature due to its current vulnerable state. The viewer sees that there are already security incidents on the grid on a daily basis in the form of cyber-terrorism. You learn that a nuclear bomb blasted high in the atmosphere could shut down the power systems in entire cities. The danger from nature comes in the form of hazardous geomagnetic disturbances from solar flares.

Producer/Director David Tice became aware of this risk to America through his long-held interest in geopolitics. Tice has been concerned about China’s and Russia’s malcontent against the US for decades, and he feels the danger has grown more grave. “What Vladimir Putin has done in Ukraine is evidence of the evil that exists in the world,” he observes.

One of the most chilling sequences in the film is when it looks at Russian’s hacks into power systems in Ukraine. A Western Ukraine attack in December 2015 left a quarter of a million people without electricity for light and heat in the middle of Winter. Next was a 2016 hack that led to power outages in Kiev, Ukraine’s capital. The third and worst attack against Ukraine in June 2017 used a malware dubbed NotPetya, which attacked the country’s power grid, wiped out data at its federal agencies, caused chaos at hospitals and banks, paralyzed railway services, and more.

In the film, New York Times cybersecurity reporter and best-selling author (This Is How They Tell Me the World Ends) Nicole Perlroth talks about interviewing the people in Ukraine who ran the forensics on these attacks. Perlroth tell us, “What sticks out to me is that they said, ‘Listen, we don’t think we were the end target. We think we were the test kitchen. We think you, the United States, are the end target.’” The Ukrainians pointed out that the damage would be far worse in the US, where so much has been digitized ‒ including our power systems.

Senator Hall is sponsoring the GOP convention screenings as he is passionate about the power grid issue. He plans to lead power grid legislation in the Texas State Senate in the next session. The presenter of the screenings is the Texas Freedom Coalition, a grassroots organization active in issues affecting the state’s citizens.

There are only three power grids in the US – the Eastern Grid, the Western Grid and the Texas Grid. “If Texas can protect their grid, it would give them great independence,” says Tice. “We believe that if the state government provides for resilient power, more business will be attracted to the State of Texas, and it will be very good for commerce.”

Tice is encouraging Americans to demand better grid regulation across the nation, including higher standards for protection of the grid. He warns that millions could perish during a long-term outage.

“Americans citizens are unaware of this vulnerability,” says the director/producer. “They just assume that if the power goes down, it will be back in six hours. An attack could bring a devastating prolonged outage. But the fact is that this vulnerability can be fixed, and the film outlines how.”

To attend the Texas State Republican Convention screenings: The 1st screening will be on Thursday, June 16th, at 2 PM and the 2nd at noon, Saturday, June 18th. Go to Room 352 C.

Grid Down Power Up Documentary Trailer

Article originally published on www.einpresswire.com as Documentary Grid Down, Power Up to Be Shown At Texas State Republican Convention