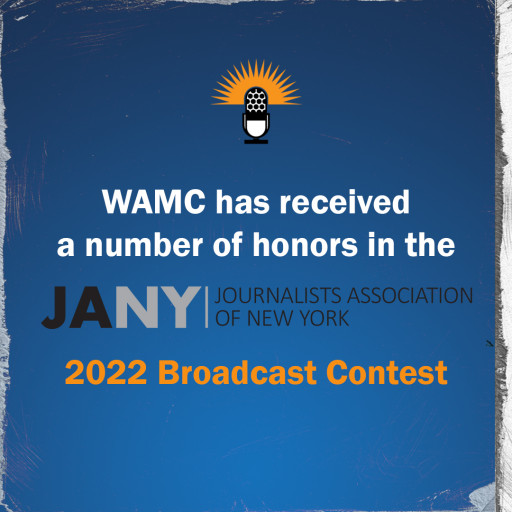 Awards were distributed at an Oct. 15 ceremony in Saratoga Springs.

"We are so honored to receive these awards from JANY," WAMC President and CEO Dr. Alan Chartock said. "This vital regional reporting and programming only exists because of our wonderful members and listeners who count on WAMC."

A New York Minute In History won first place for Best Podcast. It is a production of WAMC Northeast Public Radio, the New York State Museum and Archivist Media, with support from The William G. Pomeroy Foundation. The podcast is hosted by New York State Historian Devin Lander and Saratoga County Historian Lauren Roberts. It is produced by WAMC's Jesse King and Jim Levulis.

In awarding A New York Minute In History, the JANY judges commented, "Enjoyed listening to some New York history in these modern times."

A list of other JANY awards WAMC received include:

Judges' comments: Solid homepage presence with a good mix of news (local and NPR), features, etc. Extra points for collaborations with local TV station weather guy and Albany Times Union. The combined follower audience is impressive. The app is comprehensive and easy to use. The WAMC Podcasts site is a good idea and well-organized. Impressed with the overall professional quality of the station.

Judges' comments: Enjoyed listening to some New York history in these modern times.

Judges' comments: Like the calm voice, pretty credible way to go out and begin your day.

In May, WAMC received a Regional Edward R. Murrow Award in the category News Documentary for its Oral History of the Capitol Siege.

Among the most prestigious awards in news, the Murrow Awards recognize local and national news stories that uphold the RTDNA Code of Ethics, demonstrate technical expertise and exemplify the importance and impact of journalism as a service to the community. Murrow Award-winning work demonstrates the excellence that Edward R. Murrow made a standard for the broadcast news profession.

Original Source: WAMC Has Received a Number of First- and Second-Place Honors in the Journalists Association of New York 2022 Broadcast Contest