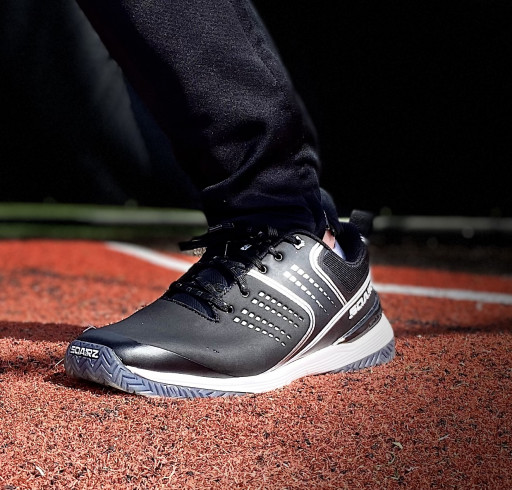 As part of its commitment to performance-driven innovation in athletic footwear, SQAIRZ has made its first expansion to a sport other than golf. After a year of testing in partnership with Louisville Slugger Hitting Science Center, the custom-designed, performance-focused SQAIRZ GFP baseball turf shoe has already shown the ability to create marked change in a baseball player's game.

SQAIRZ, the footwear company seeing incredible growth in golf shoes through its focus on performance and comfort, announced today the launch of the new SQAIRZ GFP baseball turf shoes and a partnership with Louisville Slugger Hitting Science Center.

SQAIRZ has been making waves in golf with its patented square-toe design, which has been proven to increase balance, consistency, swing speed and distance. In less than three years, SQAIRZ has won on both the PGA Tour and PGA Champions Tour and has been named among the Best Golf Shoes by Golf Digest. As part of its commitment to performance-driven innovation, SQAIRZ has made its first expansion to a sport other than golf.

After a year of testing in partnership with Louisville Slugger Hitting Science Center, the custom-designed, performance-focused SQAIRZ GFP baseball turf shoe has already shown the ability to create marked change in a player's game, impacting running, pitching, fielding, and hitting. Players wearing SQAIRZ at all levels—Major League, Minor League, and high school—showed elevated performance in all areas of the game. On the heels of these incredible results, SQAIRZ has entered into a partnership with Louisville Slugger Hitting Science Center to market a SQAIRZ performance shoe honed specifically for baseball.

"Balance, stability, and ground force production have not been given the attention they deserve in sports," said Robert Winskowicz, founder of SQAIRZ. "Controlling these three performance elements through the right shoe is critical to consistently maximizing your performance in most sports. I am very proud to partner with Louisville Slugger Hitting Science Center. Their team of experienced baseball players and coaches have put SQAIRZ through their paces, analyzing their performance in all aspects of the game, whether base running, fielding, pitching, or batting, and we are thrilled with the impressive results."

"I look at swings at every level of the game, from 10U Travel Ball Players to Major League Baseball All Stars," said Chad Miller, founder of Louisville Slugger Hitting Science Center. "I have never seen a product that has such an amazing impact on a player like the SQAIRZ GFP. With our advanced-level amateur players, we have recorded an average increase of 2.6 mph of exit velocity (approximately 26 feet of distance) when using the SQAIRZ turf shoe versus traditional turf shoes. That is the difference between making a varsity team, getting a college scholarship, or being drafted."

"As a current Major League Baseball Hitting Coordinator I constantly work with hitters and teach them how to use the ground to generate more power and balance through surface area contact," said Dave Hansen, Cincinnati Reds Hitting Coordinator and former MLB slugger. "The SQAIRZ GFP shoe is the most revolutionary and game-changing technology that I have seen in my 31 years of professional baseball playing and coaching career. I have been using the SQAIRZ Turf Shoes in our training sessions with the players in our organization. The instant feedback and results that the SQAIRZ shoes produce are something that I have never seen in baseball."

"Over the past 25 years, I have studied the effects of physical function and footwork and how these two aspects relate to ground reaction forces," said Philip Stotter, MS, CEP, Sports Biomechanist, and MLB Sports Science Consultant. "A poor relationship at the foot level will cause the energy that is used for a movement like a swing or a pitch to leak into compensatory movements and cause an athlete to lose their balance and connection with the ground. Because footwear is the only piece of equipment that stands between a person and the ground, finding the right footwear can be game-changing. Ground reaction in sports is something I test on a daily basis, and what we are finding with SQAIRZ is game-changing."

The new SQAIRZ GFP is available for presale at www.sluggerscience.com, with plans to begin shipping by early 2023.

Athletic shoes should be more than mere accessories, they are the foundation of every movement and should be drivers of true performance. The vision for SQAIRZ started on a New England driving range, where a pair of square-toed dress shoes spurred a visual realization. It continued through years of research into ground force reaction, biomechanics, and foot movement. It has culminated in award-winning shoes, now played on Tour, that will help every golfer hit more accurate and powerful shots, and soon to be accelerating performance on baseball diamonds across the country. SQAIRZ is inspired by developing performance-enhancing shoes that will change the shape of your game.