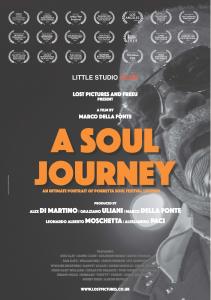 The amazing journey of soul music in the Tuscany countryside

LOS ANGELES, CALIFORNIA, US, July 19, 2022 /EINPresswire.com/ — Soul Music lives forever and is found even in a remote town in Tuscany, Italy, as shown in A Soul Journey, a moving documentary by director Marco Della Fonte.

After winning multiple awards and festival accolades, A Soul Journey, the documentary of Italian director Marco Della Fonte, is available for streaming in the United States.

In a collaboration with the STAX Museum of American Soul and the Center for Southern Folklore, producers Alex di Martino, Graziano Uliani, and Alexia Melocchi capture the “journey into Soul music through the hearts of some of the greatest Soul artists at Italy’s unique Porretta Soul Festival.”

The filmmaker and brainchild of this visual and musical feast is Marco Della Fonte, a successful film, commercial, and music video director. His career spans over twenty years and over 70 music videos for Italian international stars. European and American audiences have seen his commercials.
Graziano Uliani, a film producer, is also the festival’s founder. After attending an event commemorating Otis Redding, Uliani decided to bring soul music to Poretta, a remote and small town nestled in the hills of Tuscany, Italy.

Since its first event in 1988, the festival has featured many soul artists, including Harvey Scales, Toni Green, Otis Clay, and many more. In several moving interviews the artists describe not only important moments in the history of American music but also their careers as soul artists, their fears of being forgotten, and how they found a new audience in a place they never expected, thanks to Uliani’s soul festival.

The artists talk about their unique experiences in Italy and recognize the lasting impact it has made on those who come to listen and those who perform as well.

This award-winning film has wowed audiences at festivals like URBAN WORLD and the Palm Springs international film festival with its ability to bridge the divide between those of different ages, races, and nationalities. Through the power of music, Soul Journey proves there is more that unites us than divides us.
Soul Journey’s worldwide sales are handled by Leomark Studios and Little Studio Films, and the film is available on the Tubi platform.

Article originally published on www.einpresswire.com as Italian produced documentary captures the magic of Soul Music and its legendary artists