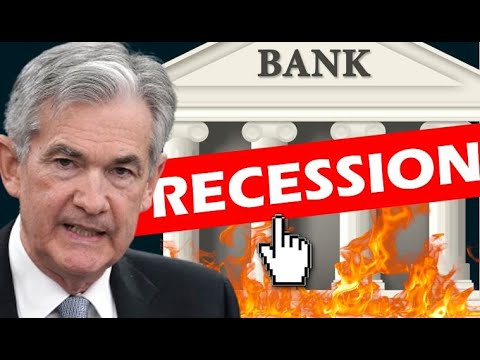 Wall Street Banks will Trigger a Recession & Debt Crisis in 2022. And there is nothing the Fed, Jerome Powell, or the US Government can do to stop it.

Jamie Dimon, the CEO of JP Morgan, just stated that an economic hurricane is coming to the US Economy and that Recession could hit by the end of 2022. Other Wall Street banks like Wells Fargo and Morgan Stanley have said similar things.

These banks could be foreshadowing a big Recession and Debt Crisis in 2022. The reason being – as these banks pull back on lending in the face of higher interest rates, the colossal $43 Trillion Debt Bubble in America’s Economy faces risk of Crashing.

Right now the US Debt Bubble is 200% higher than Personal Income. That’s an all-time high and means that debt has sustained the US Economy, Housing Market, and Stock Market over the last 30 Years. Now with the Federal Reserve and Jerome Powell in Tightening Monetary Policy via Interest Rate Hikes and Quantitative Tightening, the level of debt in America is likely to decline. And trigger a Recession as a result.

We’re already seeing this take place in the US Housing Market, where a big surge in Mortgage Rates has crushed homebuyer demand and will likely lead to a decline in prices. It’s also likely to happen with Credit Cards, as higher short-term interest rates increase the cost of borrowing and make it more difficult for the American Consumer to spend money.

Speaking of the American Consumer – their confidence/sentiment level is near the lowest level on record according to the University of Michigan Consumer Sentiment Survey. The last two times Consumer Sentiment was this low was in 1980, before a brutal double-dip recession, and 2008, before the biggest Recession / Financial Crash since the Great Depression.

DISCLAIMER: This video content is intended only for informational, educational, and entertainment purposes. Neither Reventure Consulting or Nicholas Gerli are registered financial advisors. Your use of Reventure Consulting’s YouTube channel and your reliance on any information on the channel is solely at your own risk. Moreover, the use of the Internet (including, but not limited to, YouTube, E-Mail, and Instagram) for communications with Reventure Consulting does not establish a formal business relationship.