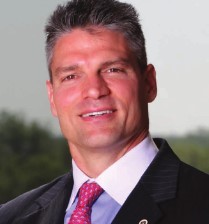 Dr. Bryan Mark Rigg, the Biographer of Woody Williams, the Last WWII Medal of Honor Recipient and author of FLAMETHROWER. Dr. Rigg is a recipient of the 2002 William E. Colby award for his work Hitler’s Jewish Soldiers. 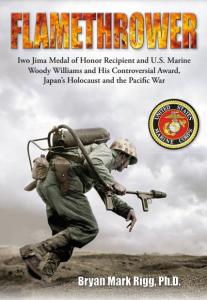 Woody Williams is Featured in FLAMETHROWER by biographer and author Dr. Bryan Rigg

WASHINGTON, DC, UNITED STATES, July 12, 2022 /EINPresswire.com/ — The last World War II recipient of the Congressional Medal of Honor (MOH), Hershel “Woody” Williams, will receive another of the greatest honors granted an individual by the United States Government. Williams, who passed away at the age of 98 on June 29, 2022, will lie in honor at the U.S. Capitol on Thursday, July 14 between 10:30 a.m. and 3:00 p.m.

“Out of 669,100 marines who fought in WWII, only 82 were awarded the MOH,” says Bryan Rigg, author of Flamethrower: Iwo Jima Medal of Honor Recipient and U.S. Marine Woody Williams and His Controversial Award.

Woody Williams received the Medal of Honor, the highest medal for valor in the United States military, for his actions on Iwo Jima island on February 23, 1945, when he used a flamethrower against the Imperial Japanese army positioned in fortified underground “pillboxes.”

Taking Iwo Jima was considered strategically sound because, at 600-miles away from Japan, it could serve as a base to launch air assaults and mount the final act of invasion. Twenty thousand Japanese were entrenched in underground tunnels and bunkers on Iwo Jima, ready to fight to the end. The battles on Iwo Jima were some of the bloodiest in Marine Corps history but the leathernecks prevailed.

Those interested in learning more about Iwo Jima, the Marines, and Woody Williams can dive deep with Flamethrower by Dr. Bryan Mark Rigg. This compelling account of a critical phase of the Pacific War, focused on the U.S. Marines of the 3rd Div., 21st Regiment, 1st Battalion, C Company and their Japanese adversaries, has been referred to as the Marine Corps version of Band of Brothers. Flamethrower highlights the importance of Iwo Jima in the course of history and connects this American triumph to the war’s ultimate conclusion—the bombings of Hiroshima and Nagasaki. The book also explores Japan’s Holocaust and the men who served Emperor Hirohito like no other book to date.

Flamethrower, ISBN: 978-1734534108, Published by Fidelis Historia, available on Kindle, Audible and hardcover on Amazon. For more info go to www.BryanMarkRigg.com.

About the Author: Dr. Bryan Mark Rigg, the Biographer of Woody Williams, the Last WWII Medal of Honor Recipient and author of FLAMETHROWER. Dr. Rigg is a recipient of the 2002 William E. Colby award for his work Hitler’s Jewish Soldiers.

He received his undergraduate degree from Yale earning honors in History; the university subsequently awarded him the Henry Fellowship to study at Cambridge University where he received his MA and PhD. Since then, he has written five acclaimed books on World War II and the Holocaust and his newest title, Conquering Learning Disabilities at Any Age. Rigg lives in greater Dallas, TX.

To arrange an interview with Dr. Bryan Rigg please contact Scott Lorenz of Westwind Communications Book Marketing at [email protected] or by phone at 248-705-2214. Reach Lorenz on twitter @abookpublicist

Article originally published on www.einpresswire.com as Woody Williams, the Last WWII Medal of Honor Recipient will Lie in Honor at the U.S. Capitol Thursday, July 14