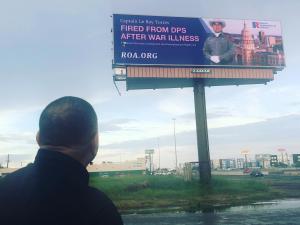 ROA-supported court case defeated Texas refusal to support its own.

In its Torres v. Texas Department of Public Safety decision, the Court reversed the Texas intermediate appellate court and in effect defeated the Texas Supreme Court, which had refused to even hear the case, citing “sovereign immunity” from such actions.

“Today’s Supreme Court decision for Captain Le Roy Torres, disabled by burn pit fumes while deployed in Iraq, upholds federal law and protects the rights of servicemembers fighting for their country,” said ROA’s chief executive officer, retired U.S. Army Maj. Gen. Jeffrey E. Phillips. “A state’s government cannot simply and egregiously flout the law for its own convenience and in so doing harm those who courageously stand for us.”

By a vote of 5-4, the Supreme Court reversed the decision of the Texas intermediate appellate court and remanded the case back to the Texas court system. Captain Torres will get his day in court. The Supreme Court ruled that “Text, history, and precedent show that the States, in coming together to form a Union, agreed to sacrifice their sovereign immunity for the good of the common defense.”

In plain English, “what’s new” is that the lawsuit brought by Captain Torres was previously dismissed by the Texas appellate court, saying Texas was immune from the suit. The Supreme Court decision today means no state can assert that sovereign immunity argument. Servicemembers now have the right to bring these suits, such as this USERRA suit contending the violation of law by a state employer, in all 50 states.

Captain Torres was a Texas Department of Public Safety state trooper when he was called to active duty and deployed to Iraq in 2007. There he was exposed to toxic burn pit fumes. He suffered constrictive bronchiolitis and toxic encephalopathy. He is now retired.

Captain Torres met the five conditions for reemployment under the Uniformed Services Employment and Reemployment Rights Act. He left his civilian job to answer the country’s call, and he gave prior oral and written notice to his civilian employer, the State of Texas. His period of uniformed service was within USERRA’s five-year limit, and since he was called to active duty involuntarily, his period of service does not count toward the five-year limit. He served honorably. After he was released from active duty, he made a timely application for reemployment.

Under section 4313(a)(3) of USERRA, 38 U.S.C. § 4313(a)(3), the State of Texas, as Captain Torres’ pre-service employer, was required to reemploy Captain Torres in the position that he would have attained if he had remained continuously employed and to make reasonable accommodations for his service-connected disability. If the disability could not be reasonably accommodated in that position, the State of Texas was required to reemploy Captain Torres in another position, for which he was qualified or could become qualified with reasonable employer efforts.

For USERRA purposes, Captain Torres’ civilian employer was the State of Texas, not just the Department of Public Safety. Certainly, there was a position in the Texas government for which Captain Torres could qualify with reasonable employer efforts. After returning home from Iraq, Captain Torres returned to work as a state police officer, but only briefly. Texas refused to make accommodations for Captain Torres’ service-connected disability and he was forced to resign his civilian job.

ROA’s Phillips twice wrote to Texas Gov. Greg Abbott, urging him to comply with USERRA in the case of Captain Torres, but the governor did not do so. ROA then drafted and filed an amicus curiae (“friend of the court”) brief urging the Supreme Court to grant certiorari (discretionary review) in this case. After the Supreme Court agreed to hear this case, ROA filed a new supportive amicus brief on the merits.

“We thank the Justices for their thoughtful and well-reasoned opinion that will ensure all servicemembers have the same rights under USERRA; a statute designed to protect them all, not just some, from acts of discrimination by their employers, including state agencies,” said attorney Brian J. Lawler of Pilot Law, lead trial counsel for Captain Torres. “This journey is not over for Le Roy Torres and Rosie Lopez-Torres; it is just beginning as we now move to Texas to try his case on the merits.”

For a century, ROA has advocated for the readiness of the Reserve and National Guard, which together make up some 40 percent of America’s military. ROA’s advocacy includes promoting enforcement of laws like USERRA. Without such laws, the military would be unable to recruit a sufficient quality and quantity of young men and women to defend our country. ROA is also a leader in the fight to pass into law the “PACT Act,” which expands VA service presumptions and health care eligibility to 23 burn pit and toxic exposure-related conditions.