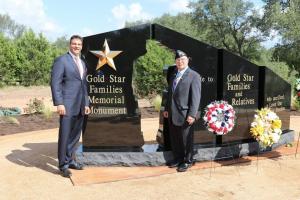 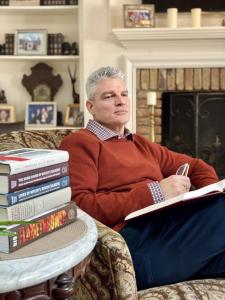 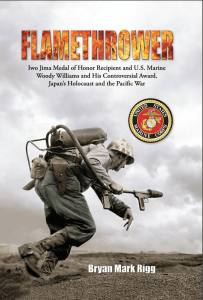 MIDDLEFIELD, CONNECTICUT, UNITED STATES, July 12, 2022 /EINPresswire.com/ — America has lost its last Medal of Honor recipient in the passing of former U.S. Marine Hershel “Woody” Williams on June 29, 2022. Williams is due to become the first enlisted man from WWII to lay in honor in the nation’s capitol.

Seven years ago, Williams accompanied award-winning historian Bryan Mark Rigg Ph.D. on a tour of Iwo Jima where he recalled the horror and heroism that had bloodied the island’s sands in 1945. Rigg wanted to capture the stories of our Greatest Generation before they were lost forever but had little idea that Williams would become America’s last surviving Medal of Honor recipient and Rigg his final biographer.

Rigg went on to conduct an exhaustive five-year study of Williams, digging through forgotten archives and deep into libraries, which would become his acclaimed book, “Flamethrower,” hailed by the 29th commandant of the U.S. Marine Corps, General Al Gray, as a “detailed and superbly researched book,” and by USMC Gen. Anthony Zinni (retired), former Commander in Chief of Central Command, who said, “His thorough research and riveting descriptions of the fighting make this book come alive as the stories of the individual Marines and the hell they went through are vividly recounted.”

Rigg’s has a personal perspective on Williams that is unmatched. “Last week, we lost a Marine Corps legend, Woody Williams, the last Medal of Honor recipient from World War II. He fought bravely on Guam and Iwo Jima and was one of 82 Marines out of almost 700,000 to receive the Medal of Honor for actions in WWII, the highest decoration this nation can bestow on an individual for valorous acts going beyond the call of duty during combat.

“It is sad to see the greatest generation die off like they are, but Woody lived a productive and active life for 98 years and served our country honorably during a challenging time in our country’s history as we fought the fascist powers of Hitler’s Germany and Hirohito’s Japan,” says Rigg.

He served as a volunteer in the Israel Defense Forces and as an officer in the U.S. Marine Corps. Besides his military service in the IDF (1998), he studied in a Yeshiva in Jerusalem (1993-1994), promoted his books translated into Hebrew during a book tour in Israel (2004), and was the proud recipient of the award to tour Israel on behalf of the Jewish War Veterans of Dallas (2005). Currently, he runs his own Financial Advisory firm, Rigg Wealth Management, LLC.

Rigg has served on the boards of the Dallas Holocaust Museum and Iwo Jima American Association. He currently is serving on the board of the American Jewish Committee in Dallas and is a member of the Jewish War Veterans. In the pursuit of supporting human rights and building good relations between nations, he was awarded the prestigious award of the Konrad-Adenauer Stiftung exchange with the AJC and traveled to Germany on a goodwill tour in 2016.

He attended Yale University and graduated with honors in 1996 majoring in history, German studies and English. Yale awarded him the Henry Fellowship to attend Cambridge University, where he earned his M.A. in 1997 and his Ph.D. in 2002. His first book won the prestigious William E. Coby Award in 2003 for the best military history book of 2002 for a debut author. His work has been featured in the London Telegraph, New York Times and the Los Angeles Times. In addition, his work has been featured on television and in documentaries, including NBC Dateline in the U.S., WDR Docudrama in Germany, and on Channel One in Israel.