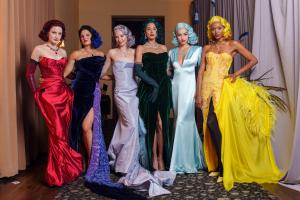 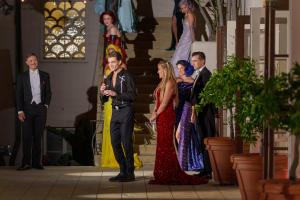 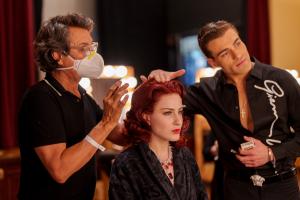 This project is a once-in-a-lifetime opportunity for me to not only re-create such iconic gowns but to also add my vision as to how I think Ms. Garland would wear these gowns today.”

LOS ANGELES, CA, UNITED STATES, June 15, 2022 /EINPresswire.com/ — Old Hollywood glamour never fades, especially Judy Garland’s wardrobe and styles from her classic films such as “Meet Me in St. Louis” and “Easter Parade.” Many of today’s fashion houses and designers take inspiration from Ms. Garland’s work which they, in turn, bring to modern-day runways. So is the case of Roberto Racanelli, founder of House of Racanelli.

On June 10, 2022, the world celebrated what would have been the 100th birthday of Hollywood’s legendary actress and entertainer Judy Garland. A celebratory event and unisex fine fragrance reveal for JUDY – A Garland Fragrance by Vincenzo Spinnato took place that night at the Ebell of Los Angeles with a special “window display” of six Oscar-worthy, re-created and Judy Garland-inspired dresses she wore as a young actress. “This project is a dream come true,” says Racanelli. “It’s a once-in-a-lifetime opportunity for me to not only re-create such iconic gowns but to also add my vision as to how I think Ms. Garland would wear these gowns today.” Whether it is creating a couture garment or a stylish décor, Racanelli aims to please with his artistic touch for creating visual fantasies.

For the remaining weeks of the month of June, in commemoration of NYC Pride and Judy Garland’s 100th birthday anniversary, Racanelli will display the six inspired-by dresses in the lobby at the Empire State Building.

With a number of seamstresses in his Italian family, design and fashion seem to be in Racanelli’s blood. One family member who played a significant role in his early life was his Aunt Juliette Trolio, whose renowned boutique for dressmaking supplies in Montreal, Canada, RIX RAX, inspired him. At the age of four, Racanelli started playing with fabrics, feathers and ribbons and began dressing dolls as well as his sister and muse, Elysia. His aunt gave him his first mannequin when he was eight years old, the same age when he created his first window display at her store. At the age of 10, Racanelli got his first sewing machine. At a later age, he went to school at La Salle College for fashion; followed by Dawson College for interior design, both of which are located in Montreal. That’s when Racanelli also started developing a deep love for Old Hollywood, including the wardrobes, looks and styles of classic movie stars such as Judy Garland, Marilyn Monroe and Marlene Dietrich.

In creating the six iconic dresses for the gala, Racanelli says he let each gown speak to and inspire him. Whether the powder blue dress from “Ziegfeld Follies”, the red dress from “Meet Me in St. Louis”, the green dress from “Easter Parade”, the lilac and dark blue beaded dresses from “A Star is Born”, or the yellow dress from “Till the Clouds Roll By”, Racanelli began each gown with an idea that he translated into a drawing. He then took each drawing and created an intricate, detailed pattern by draping cotton muslin on a mannequin. After the pattern was made, he began cutting, sewing, molding, shaping, tucking and finessing each dress. In the end, the dresses were actually made three times, from the first cotton muslin to the ‘test’ dress, to the final custom-made, couture gown.

Racanelli says his overall desire is to combine skill, craftsmanship and fantasy to create high-quality, custom clothing tailored exactly to what any woman would want to wear. “It’s not about me,” says Racanelli. “What gets me excited is the happiness on a client’s face when she gazes into the mirror and sees how absolutely fabulous she looks and feels in my design.”

According to Racanelli, the hair and makeup of the six models who wore the couture gowns at the gala were inspired by the iconic Andy Warhol painting of Judy Garland. Wigs were created by Wig Master Scotto Di Cesare and make-up and hairstyling were done by award-winning Darrell Redleaf-Fielder.

For more information about the dresses and how to purchase, visit: https://judygarlandfragrance.com/judy100