Levin Papantonio Rafferty Attorney Mike Papantonio wrote to the Florida PSC and personally funded a string of television PSA’s, on top of an online petition and heavy social media, to get the attention of regulators and demand a new rate hearing. 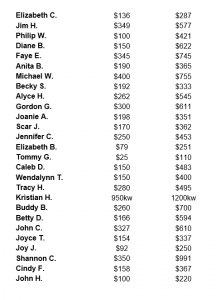 NextEra is used to operating in communities that are unwilling to aggressively push back. That is not the case here.”

“NextEra is used to operating in communities that are unwilling to aggressively push back,” Papantonio said. “That is not the case here.”

Florida Power & Light (FPL), backers of the bill, is owned by NextEra Energy.

The controversial bill would have reduced the amounts due to rooftop solar users from utility companies buying back excess power. This raised the eyebrows of many Floridians who had grown wary of FPL since the company purchased homegrown utility company Gulf Power Company three years ago. As more and more residents began exploring the idea of going solar, FPL unveiled its plans to control solar.

This would come as no surprise to Papantonio whose suspicions sprung with the discovery that FPL parent company NextEra happens to be one of the largest alternative energy distributors in the world.

“This is a massive corporation that lost its moral compass long ago,” Papantonio explained, “and our politicians and regulators seem to be fine with that.”

The people of Florida’s Panhandle started bucking the FPL-backed bill in January when the utility company’s rate hike took effect. It was at this time that Papantonio’s phone started ringing. Residents were calling the attorney nonstop, pleading for his help in combatting the utility giant.

In February, Papantonio drafted a letter to the Florida Public Service Commission (PSC), demanding that it reconsider approval of the utility rate increase that was causing power bills to spike by hundreds of dollars—essentially doubling or even tripling from the previous month’s bills.

When LPR posted its social media PSA and a petition demanding an FPL audit, the firm’s Facebook page came alive with comments from angry residents adding comments like:

• “I guess a lot of people will be moving away from this tyranny. I lived here my entire old life and will be leaving. I cannot afford it. Sad to be run out of your home state because of electric bills.” –Denise G.

• “I’d like to see all the bank accounts of each politician. Follow the $$. Ethics Commission has to review all political donations. Who from Fl will leave office wealthier than when going in office?” — Kathy E.

• “I’m a retired senior and disabled on top of this. Now I’m deciding on light bills, medicine, groceries, and any emergency that might come up. I don’t know at this point what people are gonna do…with this inflation on top of everything.” — Teresa D.

• “I’ve suspected this all along. With all the ads I was seeing to “go solar and beat the greedy power company” it seemed pretty clear someone was trying to force everyone into a corner about going solar.” — Kristina S.

• “My bill was like $150 or $200 a month now it’s over $622 …my [power] might be cut off soon so that means my food will go bad. I’m a stay at home grandma–I don’t get food stamps or have health insurance…if my electric gets turn off my grandkids can’t stay over or come over… something needs to be done I’m already sick with a head cold for a month now cause I don’t use my heat unless my grandkids come to stay.” — Diane B.

• “Bill almost tripled! Is it not a PUBLIC utility??”– Marion D.

• “From $192 to $333 to [projected] over $500 for next month. Now I’m sitting at home working wrapped in a blanket, with my blinds open for adequate lighting. Why are we being forced to ice like this when 2 months ago our usage wasn’t a problem? Suddenly I’m the light police in my house, unplugging everything I can. This is just insanity to me, and I can’t imagine any of this is legal. Thank you for what you are doing! We need someone to represent us as our elected officials either refuse or can’t be found…”. — Becky S.

The Fever of Frustration Broke When Least Expected

As this information spread, FPL customers learned their utility bill anomalies were perhaps not the exception, but rather the norm. A group of local individuals formed a Facebook group aimed at forcing a response from Florida regulators. They launched a petition that generated 17,000 signatures.

The outrage grew as Tallahassee kept a nervous watch. Finally, on April 27, Gov. Ron DeSantis vetoed HB 741, which would have permitted Florida electric companies to thwart solar panel investments by homeowners and businesses by imposing steep fees for such installations.

“Given that the United States is experiencing the worst inflation in 40 years and that customers have seen steep increases in the price of gas and groceries, as well as escalating bills, the state of Florida should not contribute to the financial crunch that our citizens are experiencing,” DeSantis explained in his veto letter.

Florida Conservation Voters, however, gave credit for the veto to Florida citizens. The group tweeted, “Gigantic win. All credit to the people of Florida, who know a bad deal when they see it — and made themselves heard!”