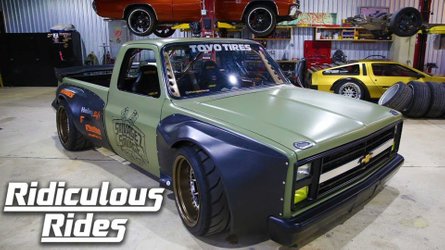 Whenever enthusiasts want to convert an older gas-burning vehicle to electric and they want the resulting vehicle to be fun, they put a Tesla motor in it, preferably from a performance model. But for some one is never enough, like in the case of this absolutely bonkers old 1985 Chevrolet C10 that is motivated by two Model S motors that together give this truck in excess of 1,200 horsepower and all-wheel drive.

They called the vehicle the S2SLA, because it’s built by a shop called Salvage 2 Salvage from Boca Raton, Florida. There’s really not much of the original Chevy C10 left untouched in this project. Apparently, only the grille and headlights were carried over unmodified, and if you check out the Facebook video embedded below, you will see just how much fabrication work went into making this C10 look as low and wide as it does, and also to make it functional.

Virtually everything needed to be custom made, but now they say the vehicle is fully functional, drivable and with that much instant power on tap, probably a little scary too. The battery pack powering everything is out of a Model 3, but we don’t know which variant or model year. Given how much work they have clearly put into it, it’s no wonder the project took them 8 months to complete, but it certainly looks and goes like nothing else on the road – who wants to see this drag raced against a Model S Plaid?

Mike from S2S, one of the people behind this project, explains why they did it, what the reasoning behind this build was. He said

In order to stand out in a crowd of a bunch of people, you kind of have to do something extreme, so that’s how we came up with this design. Having two Tesla motors would be like having two V8s in your truck. One of these motors would be sufficient to push this truck and have power and have a lot of fun. But again, you want to be fast, you want to be extreme, we’re gonna throw two of them in there.