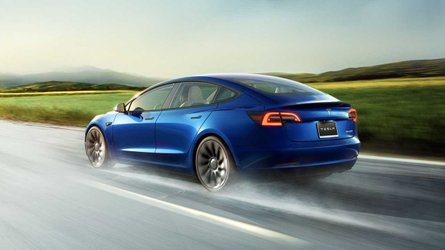 This isn’t the first time we’ve seen a driver using Tesla Autopilot incorrectly. In fact, there have been many reports of people sleeping in their cars while the advanced driver-assist system is in control. Some Tesla owners have used the technology to be their designated driver after too much drinking as well. While the system may be working at the time of the footage, this is extremely dangerous.

Tesla’s Autopilot is essentially just a suite of driver-assistance systems that help keep the car moving at the speed of traffic while staying in its lane. The system uses adaptive cruise control with stop and go, which is a common feature on many of today’s cars. It pairs that with some various lane-keeping technologies and other safety features, such as automatic emergency braking and pedestrian detection. These are all features that are there to “assist” drivers and reduce the likelihood of a serious accident.

According to Tesla’s Autopilot Software Director Ashok Elluswamy, the technology can work to prevent some 40 crashes per day. He’s specifically referring to crashes that are caused by the driver accidentally pressing the accelerator pedal at 100 percent rather than the brake pedal. This wouldn’t likely apply if the driver was sleeping unless they woke up and suddenly pushed the wrong pedal.

That said, safety features like those found in Autopilot are suggested and even encouraged by the Insurance Institute for Highway Safety (IIHS), and they’ve been proven to reduce crashes. If the technologies caused more crashes than they prevented, IIHS likely wouldn’t factor collision avoidance systems into a vehicle’s score and safety rating.

In addition to all of the above, Tesla continues to reiterate that owners must follow the rules when it comes to Autopilot. They can’t get drunk or go to sleep. The driver is responsible for the car at all times, so they must be ready to take control at any moment.

As you can see from the short video clip below, it appears the driver is asleep. However, the car shouldn’t allow this to happen, and definitely not for any period of time. There’s a chance the clip was somehow faked, or the driver learned how to trick the car into proceeding. Consumer Reports published a video teaching people precisely how to trick Tesla Autopilot, so the information is definitely out there.

Drive Tesla Canada shares that the video was taken in Ontario, Canada, on Queen Elizabeth Way. It’s clear that the driver is laying back and not touching the steering wheel. As the video zooms in, you can see that the driver has their eyes closed. Even if they’re pretending, and this is staged, it’s still incredibly dangerous for the Tesla driver to be leaning back with their eyes closed and no view of the road or hands on the wheel.

As always, let us know what you think. Scroll down and leave us a comment below. Does your car have adaptive cruise control and lane-keeping technology? Do you think Tesla’s Autopilot tech is vastly different from the features available on other cars?

This news story originally appeared at Aviation News - on6 September 2022