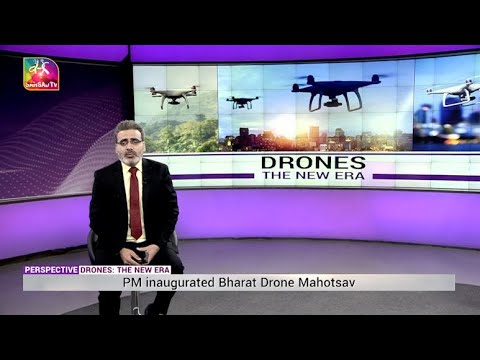 In this episode of the Perspective Prog. based on ‘Drones: The New Era’. Unmanned aircraft systems, commonly referred to as drones, are democratizing the sky and enabling new participants in aviation. Inaugurating the Bharat Drone Mahotsav on Friday, Prime Minister Narendra Modi highlighted the importance of drone technology in the fields of defence, disaster management, agriculture, tourism, film and entertainment. He also said that the enthusiasm surrounding drone technology in India indicates that it could soon become an emerging sector of employment generation in India. According to Civil Aviation Ministry’s estimates India’s drone sector is all set to achieve a total turnover of 120-150 billion rupees by 2026, from its current turnover of about 800 million rupees. In the recent past the Central Government has undertaken a series of reform measures to promote India’s upcoming drone industry. The new drone laws have started facilitating traction in the market with numerous companies partnering to disseminate technology knowledge and attract funds

This news story originally appeared at Aviation News - on2 September 2022