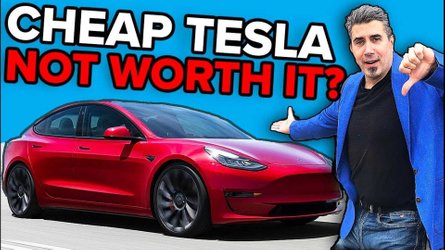 The Tesla Model 3 is undoubtedly a fantastic car. After all, there’s a reason why it’s the best-selling EV of all time. But it’s not without its problems. And it’s also rather expensive – around $10,000 more than it was when it first went on sale. Hence alternatives that benefit from the full $7,500 Tax Credit, like the Polestar 2, are beginning to make more and more sense.

Most “Tesla Cult” YouTubers have nothing but praise for their Model 3s. But often they’re coming from far inferior vehicles and don’t know a lot about cars in general. It’s rare that we hear a Model 3 review from a true petrolhead who actually knows a lot about the auto industry. So when we do, we sit up and listen. Mark Holubetz, who runs the channel ExoticCar PlayPlace, has an extensive history with enthusiast cars. For example, he recently sold a Lamborghini Gallardo and currently owns a Jaguar F-Type R and BMW M5. He also has a Tesla Model 3 which he seemingly regrets buying.

Mark first talked about the 11 recalls the 2021 Model 3 currently has. Although he did not mention this, the vast majority of those recall issues can be resolved via OTA updates. Another thing he dislikes is Tesla’s use of cameras for its self-driving features. He doesn’t understand why Tesla refuses to use radar like most other automakers. To be fair, that is a good point. Ever since Tesla CEO Elon Musk went against radar in favor of camera-only “Tesla Vision” occurrences of Phantom braking have seemingly spiked. He also noted that the Model 3’s cameras often fail to recognize the difference between kph and mph on speed signs when driving between Canada and the US.

The windows don’t defrost properly according to Mark, or at least as well as some other vehicles in the Model 3’s price bracket. The front suspension lateral link has come loose for him and is a known issue. He noted that the paint quality was poor and is often too thin in places. Rusting can be a problem as well. He isn’t a fan of the numerous panel gaps on his car either. Mark also highlighted that water can leak into the front headlights and trunk, resulting in mold.

Furthermore, Mark mentioned alignment issues on the door panels. He also discussed “Emergency Shutdowns”. Although rare, it is a known issue where the Model 3 can decide to shut down due to an issue with its high voltage controller.

Mark concluded that while the Model 3 is on paper a good car, quality control needs to be improved – particularly in colder climates where vehicles are more prone to electrical and mechanical issues. Although he isn’t entirely against the 3, he does note that there are now a lot of similarly priced, better-built alternatives from traditional manufacturers (e.g. the BMW i4). Equally, although he didn’t mention it in the video, there are also several EVs that are beginning to outperform Tesla from a self-driving perspective too – for example, according to Consumer Reports testing GM’s radar-based SuperCruise system is now ahead of Tesla Autopilot. Equally, Ford CoPilot is now capable of hands-free self-driving on pre-mapped US routes.

But what are your thoughts on the Model 3? A good car, but not worth upwards of $46,990? Or do you think the Model 3 is still hands-down the best electric sedan? Let us know in the comments below.