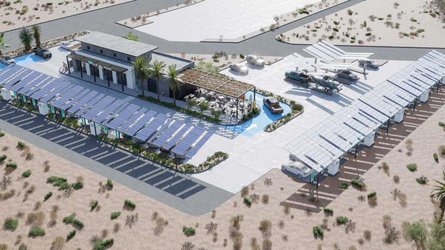 This article comes to us courtesy of EVANNEX, which makes and sells aftermarket Tesla accessories. The opinions expressed therein are not necessarily our own at InsideEVs, nor have we been paid by EVANNEX to publish these articles. We find the company’s perspective as an aftermarket supplier of Tesla accessories interesting and are happy to share its content free of charge. Enjoy!

Charging hubs, which feature multiple DC fast chargers along with restaurants and retail outlets, could be the next big thing. It’s a successful model Tesla has followed for years at its Supercharger sites, and it appears to be catching on.

The company says the site will include 40 DC fast charging stations, of which 8 will be “universal charging stations.” That would seem to suggest that the other 32 will be Tesla Superchargers, as those are the only type of DC chargers that aren’t “universal” (although they soon may be). The company wouldn’t say who the operator(s) will be, but a photo accompanying the press release did indeed show some Tesla Superchargers.

Construction on the Baker site will begin in Q4 2022, and is expected to be completed in Q2 2023. The Stack Charge hopes to build 10 charging hubs in Southern California over the next year, at locations in Los Angeles, San Bernardino, Orange and San Diego Counties.

“There is a lack of fast-charging infrastructure despite the growth of EV sales,” said Stack Charge co-founder Lester Ciudad Real. “We are looking to acquire sites that have strong retail real estate fundamentals and benefit from high transit traffic, as we anticipate demand to skyrocket as EVs continue to dominate the market.”

This news story originally appeared at Aviation News - on13 June 2022