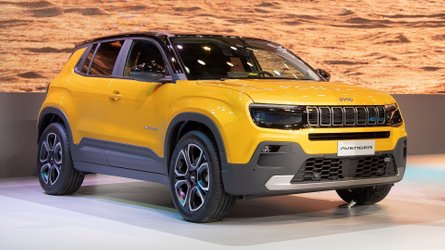 Jeep’s first fully electric model, the Avenger, has been crowned European Car of the Year. Although customer deliveries won’t start until late March, the Avenger comfortably beat the rest of the competition. It received 328 votes in total, with second place going to the VW ID.Buzz (241 votes). Only senior journalists from accredited automotive publications were allowed to vote.

Other nominees for European Car of the Year included the Kia Niro EV, Nissan Ariya, and Renault Austral. Jurors outlined several reasons for the Avenger’s success, one being its price. Jeep’s EV starts at €39,500 in fully loaded First Edition guise, with more affordable trims expected to arrive at a later date. Furthermore, the Avenger is very practical with plenty of trunk space and second-row legroom. Its 248-mile WLTP range is also competitive for its price point.

The Avenger is powered by a 54 kWh battery pack and is front-wheel drive. With 152 hp and a 0-60 mph time of around 9 seconds, performance is clearly not a priority. That’s okay though, as most buyers will be coming from equally slow ICE crossovers and will be drawn by the Avenger’s practicality, rugged looks, and low running costs.

Meanwhile, in the US Jeep plans on launching a fully electric version of the Wagoneer in 2024. Currently codenamed Wagoneer S, the full-sized SUV will go toe-to-toe with the Rivian R1S.

Interestingly, Jeep ran a competition to name its electric SUV. As mentioned, Wagoneer S is only a codename and the final production version will be called something more unique. The contest closed back in early December, with the winning name remaining under wraps for now. The winner received a luxury Wyoming ski trip worth a staggering $40,000.