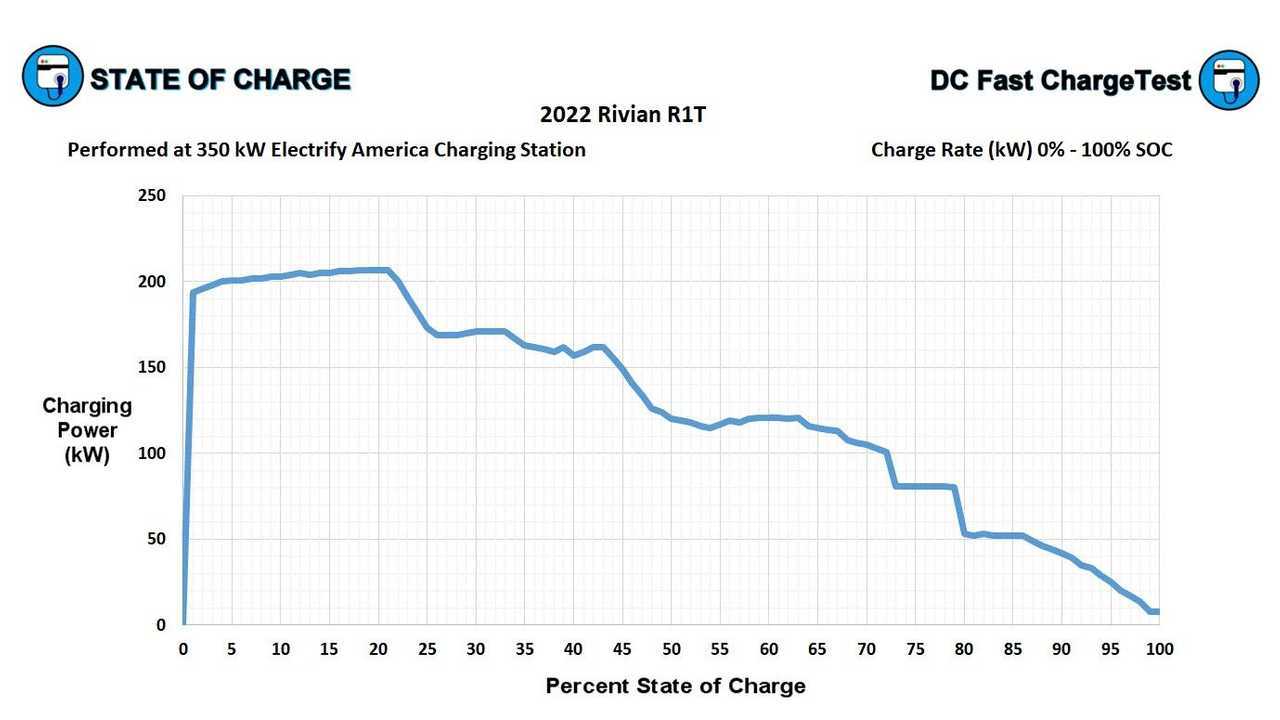 The Rivian R1T has demonstrated exceptional off-road capabilities as well as fantastic on-road manners, at least as far as pickup trucks are concerned. Early customer reports have been overwhelmingly positive and it seems that Rivian’s biggest problem appears to be the inability to quickly scale up production to meet orders.

However, we haven’t really had a comprehensive DC fast charging review and analysis yet; until now, that is. We were able to secure an R1T loan to do the InsideEVs 70 MPH highway range test (look for that video and article this week) as well as record a full 0-100% DC fast charging session.

As always, we then take the full recording and put it on paper, so we can plot out the full charging curve and also explain how many miles per minute are added.

Rivian recently sent out an OTA update that increased the maximum amperage that the R1T can accept from a DC fast charger from 450 amps to 500 amps. Our loaner had the update and we were able to pull over 200 kW for a short period after the initial plug in. However, it only held 200 kW until the 22% state of charge point, when we saw a pretty steep drop off to about 170 kW.

The R1T holds over 150 kW until 45% state of charge, and drops down under 100 kW at 72%. Once the vehicle reached 80% the charging power dropped down to 50 kW and had a relatively smooth gradual decline until the vehicle was fully charged.

The charging station delivered 140 kWh, which means there were approximately 15 kWh (12%) charging losses during this charging session, which is quite normal for large battery EVs that charge at high rates. The R1T has a 135 kWh battery, but that’s the gross capacity. The usable capacity sits at 125 kWh, as we’ll explain in the upcoming 70 mph highway range test video and article.

The entire charging session took one hour and thirty-five minutes. We broke the session up into three 32-minute sections to demonstrate how many miles of range per minute is added in each third of the charging session.

Although every EV charges differently, it’s typical for EVs to have a similar charging profile where the initial third of the charging session adds back much more energy than the other two-thirds.

But we think it’s important to show just how the breakdown looks on paper, and help to explain why you really don’t want to charge your EV at a DC fast charger past 80% or 85%. The charging speed slows down so much that unless you absolutely need the extra 10% of the battery, it’s just not worth the wait.

The R1T charges pretty well and took 42 minutes to charge from 10% to 80%. During that time, added back an average of 5.23 EPA-rated miles per minute.

So check out the video and let us know what you think in the comment section below.