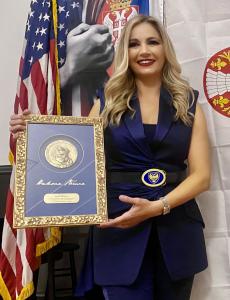 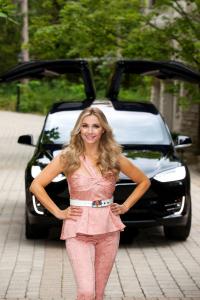 Marina Arsenijevic and her Tesla X 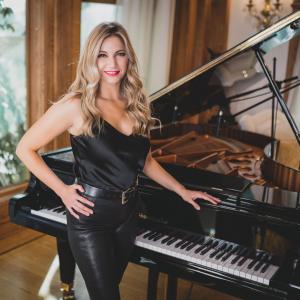 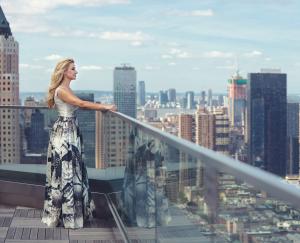 NEW YORK, NY, USA, July 11, 2022 /EINPresswire.com/ — The TESLA SCIENCE FOUNDATION has awarded composer and pianist Marina Arsenijevic its highest honor, the TESLA GOLD SPIRIT AWARD on July 9th, 2022 in Philadelphia, PA USA. The ceremony took place on the day of the 166th anniversary of Nikola Tesla’s birth. Tesla Science Foundation president Nikola Lonchar said “the virtuoso talent of Marina Arsenijevic through her composition TESLA RHAPSODY has added a new dimension in honoring Nikola Tesla to classical music lovers in every corner of the globe. She was the clear choice for receiving this award”.

ABOUT TESLA RHAPSODY: Marina’s TESLA RHAPSODY was released on April 15th worldwide exclusively through Apple and Amazon. It is the first major musical composition honoring the great Nikola Tesla. Since its release, it has achieved critical acclaim as a “tour de force” on classical radio stations in the United States, Canada, Australia, Great Britain, Europe, and South Africa. It is composed for solo piano and symphony orchestra combining elements of classical music, folklore, jazz and blues. It is a multilayered rhapsodic piano structure with distinguished melodies interwoven from Tesla’s heritage. The opening is inspired by Byzantine chants and church bells reflecting the sounds of Tesla’s childhood. This is augmented with elements of folklore from Tesla’s homeland. Since Tesla lived most of his adult life in New York City, TESLA RHAPSODY uses elements of jazz and blues with bitonal and bimodal episodes to reflect his busy and highly productive New York life. The structure of the composition is inspired by Gershwin’s “Rhapsody in Blue”. The piano texture is distinguished by “hidden” melodies in inner parts, dense polyphony, broken chords in open positions, and frequent pedals which contribute toward the static or ambivalent feel of the harmony. TESLA RHAPSODY concludes in a heroic crescendo reflecting the impact of the genius of Tesla on the world.

ABOUT MARINA ARSENIJEVIC (arson-nee-vitch): She is an international award-winning pianist and composer, star of the Emmy nominated Public Television program, MARINA AT WEST POINT: UNITY THROUGH DIVERSITY which has been broadcast to more than 170 million viewers with over 550 airings by PBS Stations across the United States. Marina created the program and performed with the 120-member joint ensemble of the West Point Band and West Point Glee Club. The Concert was recorded live at West Point’s historic Eisenhower Hall and has been broadcast for more than a decade through 2020.

Critics have described Marina as a “James Bond” beauty with a powerhouse technique that delivers an emotional punch like a “Balkan thunderbolt,” while her compositions have been described as “breathtakingly original” and “unique to the ear but familiar to the soul”. Marina has performed to enthusiastic audiences and standing ovations at major venues such as Carnegie Hall, the Chicago Symphony Center, the Toronto Center for the Arts, the Chicago Navy Pier, and many others throughout the country. Laura Bush and Cherie Blair (wife of the British Prime Minister) along with 2000 other guests were dazzled when Marina played her original arrangement of America the Beautiful at the annual First Lady’s Luncheon in Washington D.C.

Marina’s recordings of MOZART: MARINA and the ST. PETERSBURG SOLOISTS and CHOPIN: WALTZES became top-selling classical CDs in Central and Eastern Europe. Her album, MY BAKAN SOUL was a best-selling classical crossover CD in 11 European countries. Marina’s CDs have sold over one million copies world-wide. She was featured on 40 magazine covers and hundreds of television programs in Europe. She received the Yugoslavian “Oscar” for most popular musical artist in 1996. The following year, she was the first classical artist to cross all genres and receive the Yugoslavian Award for Most Popular All Media Personality. Marina is the recipient of numerous honors including the prestigious Ellis Island Medal of Honor “for her outstanding achievements and humanitarian efforts in building bridges among diverse cultures and nations through her music”. She is considered a heroic icon in her homeland of Serbia where she received Serbia’s highest diplomatic honor, Knight of the Order of St. Sava for Diplomatic Pacifism.

Marina is currently composing music for theatre and concert stage commemorating the life of her fellow Serbian American, the renowned scientist Nikola Tesla. Her master work for piano and orchestra “TESLA RHAPSODY” will debut in 2022/2023 with orchestras in the United States and Europe. Marina enjoys a vast following on her social media with over 650,000 Instagram fans, more than 7 million views of her music videos on YouTube https://www.youtube.com/marinaarsenijevicofficial and according to TracMedia, she had over 170 million PBS TV viewers of her concert “Marina at West Point: Unity Through Diversity” which was broadcast for more than ten years.

ABOUT TESLA SCIENCE FOUNDATION (TSF): TSF is a non-profit organization dually based in Philadelphia, USA and Belgrade, Serbia with additional chapters all over the world. Its mission is to preserve the legacy of Nikola Tesla and his work. TSF hosts two public conferences per year scheduled on the days of Tesla’s birth and the last day of his life. Each year TSF recognizes one person for the Tesla Gold Spirit Award for outstanding achievements that have honored the legacy of Nikola Tesla from the fields of art, literature, film, music, science or education.

ABOUT NIKOLA TESLA: The numerous inventions of Nikola Tesla are recognized as pivotal to the major technological advances of both the 20th and 21st centuries. Albert Einstein acknowledged the significance of Tesla’s work in response to a reporter’s question. When asked about how it felt to be a real genius, Einstein without hesitation replied, “if you really want an answer to that question, then you have to ask Tesla.” The legacy of Nikola Tesla lives on through the continued application of his inventions even today. The name of Tesla (symbol T) has been memorialized by the entire scientific community since 1960 as a unit of magnetic field strength in the International System of Units. Today, his name has become even more universally known through the amazing success and popularity of the TESLA electric car and the efforts of our modern-day genius, Elon Musk.