Schuylkill Navy Series sponsor Toyota returns to the Stotesbury Cup Regatta as the Presenting Sponsor of the 95th Regatta in 2022 . 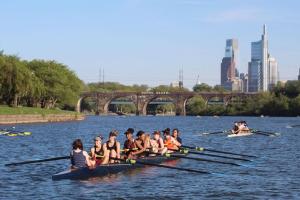 The Stotesbury Cup Regatta returns to Philadelphia this weekend, May 20 and May 21, 2002, for the 95th edition on the historic home to rowing, the Schuylkill River.

Toyota is excited for the return of the Stotesbury Cup Regatta this month, which facilitates so many student-athletes opportunity to compete. ”

PHILADELPHIA, PA, UNITED STATES, May 19, 2022 /EINPresswire.com/ — Philadelphia, PA – Thursday, May 19, 2022 – The Schuylkill Navy of Philadelphia is proud to announce its continued partnership with Toyota and the Tri-State Toyota Dealers Association as Presenting Sponsor of the 95th Stotesbury Cup Regatta. The Regatta – which is Philadelphia’s largest sprint race – is also the largest scholastic regatta in the world and takes place Friday, May 20 and Saturday, May 21 on the Schuylkill River.

As Presenting Sponsor of the overall Series, Toyota supports the Schuylkill Navy’s 365-day-a-year efforts on behalf of the rowing community, including river stewardship, ensuring river user safety, and developing rowing talent at every level – from young scholastic student-athletes to elite-level rowers preparing for and competing on the global stage at the Olympic and Paralympic Games.

“Our association is comprised of the 25 local Toyota Dealers living and working in Greater Philadelphia, and we deeply value assisting the Schuylkill Navy with the Series and in their overall efforts of preservation/conservation of the Schuylkill River and Boathouse Row – one of the most-iconic and important historical landmarks in our region – helping to expand river stewardship and maintain river user safety,” said Paul Muller, President of the Tri-State Toyota Dealers Association.

“Toyota is excited for the return of the Stotesbury Cup Regatta this month, which facilitates so many student-athletes opportunity to compete. As the local Toyota Dealers, we are so proud to help Toyota support this event with the Schuylkill Navy and look forward to cheering on all of the rowers competing,” Muller added.

The funds from Toyota’s donation will help continue all of the efforts behind the ongoing “The Schuylkill Navy Series presented by Toyota” and their elite-level High-Performance Collaborative program.

“The breadth of Toyota’s support helps us continue to improve all events at our historic venue as well as providing a significant resource to allow Boathouse Row athletes to compete at a world-class level,” said Bonnie Mueller, Commodore, Schuylkill Navy. “The Schuylkill Navy is grateful for the generous support that Toyota has provided over these recent difficult years. We are so happy to join the Tri-State Toyota Dealers Association in welcoming back the crowds of athletes and fans to our historic river venue,” the Commodore added.

Toyota and the Tri-State Toyota Dealers’ support of the Schuylkill Navy Series events and the High-Performance Collaborative team members is centered on Toyota’s global mission of “Mobility For All”. It is Toyota’s goal to continue to emphasize its commitment to creating an ever-better society through freedom of movement by championing local hometown heroes and national athletes, as well as presenting sponsorship of events such as the Stotesbury Cup Regatta that connects with people locally to share and encourage others to do the same.

Helping and celebrating student-athletes and Olympic | Paralympic hopefuls to move beyond their dreams is a core part of Toyota’s partnership and support of the Olympic & Paralympic Movements and the Tri-State Toyota Dealers’ support of the Schuylkill Navy Series events.

“To continue helping student-athletes and support our local Olympic-hopefuls – all the while expanding development and access to rowing talent at every level – is a core part of our local support of the Olympic & Paralympic movements, which helps drive our continued support behind The Schuylkill Navy Series we help fund each year,” said Paul Muller.

Related to support behind elite-level rowing, a portion of the Schuylkill Navy’s partnership with Toyota places funding behind the Schuylkill Navy High Performance Collaborative to help local rowing athletes train to compete at the 2024 Olympic and Paralympic Games in Paris.

“As we all prepare for Paris in 2024, Toyota is excited to continue our relationship with the Schuylkill Navy and support of their High Performance Collaborative team,” said Paul Muller. “The support of the rowing community here in Greater Philadelphia and ongoing commitment to the Schuylkill Navy is one of our most important and meaningful partnerships,” added Muller.

Toyota’s global “Start Your Impossible” campaign brings this mobility initiative to sport with support for the Olympics and Paralympic Games. As an additional important part of this effort, Toyota supports Team Toyota Athletes such as Oksana Masters, a six-time Team USA Paralympian who has won 17 medals over her career – including her bronze-medal in adaptive rowing during the London Summer Paralympic Games in 2012.

The Toyota Experience at the “Stotesbury Cup Regatta on Friday afternoon, May 20, from 1:00 to 3:00 PM will include Team USA Rowers:

• Team USA Paralympian Rower, John Tanguay, will be at the Toyota Experience to meet with event attendees and share his silver-medal experience at the Tokyo 2020 Summer Paralympic Games as part of Team USA.

• Team USA Olympian Rower, Brooke Mooney, will be at the Toyota Experience to meet with event attendees and share her experience from the Tokyo 2020 Summer Olympic Games as part of Team USA.

The Toyota Experience at the “Stotesbury Cup Regatta, presented by Toyota,” is located in Stotesbury Village near the Grandstand Finish Line.